52
continues growing money on trees for hospitals
✅ It passed, so...
The mechanism described below will continue to happen, but now the amount that is diverted to the General Fund will remain contant. This particular state consitutional amendment can repealed in the future with a 2/3 vote by the legislature.
Summary
Before we explain anything, you should know that the only group that opposed this measure withdrew its opposition and switched from "opposed" to "neutral."[4] So at this point, no group opposes the measure, and it is very widely supported. The SF Chronicle even says the measure is so complicated in its language that Prop 52's biggest challenge is getting people to understand it enough to not skip over it or vote No.

Well, in 2009, the state legislature was like 😏  and decided to tax private hospitals instead of all Californians. They took most of that $4.6 billion and put it into Medi-Cal, thus triggering the federal matching grants to the tune of $4.4 billion, making a net ~$3B. They then gave that back to the hospitals, private and public, (although not all private hospitals fully recovered the tax fee). To put it loosely, California is making money (~$3B) through this scheme (paid for by US taxpayers), and Prop 52 codifies this into the state constitution.

Prop 52 stipulates that legislators cannot divert funds away from Medi-Cal, thus ensuring that Medi-Cal and hospitals get the money.[5] 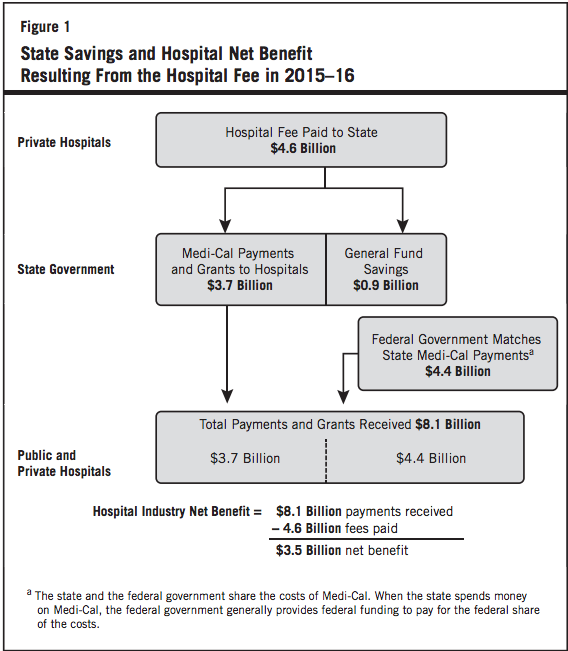 Graphic provided by the Legislative Analyst's Office[3]
If this is so good, why are we citizens voting on it?
The people who wrote this proposition, the California Hospital Association (those who get taxed), didn't want legislators wrangling with the terms.[5] It works well as is, they contend. The state already takes about a quarter of it for the General Fund, but if sides start squabbling, they might take more, or the tax might not get renewed. The Hospital Association says this money is crucial.[..] Hence, they want it protected in the constitution (but with the ability for it to be repealed with a 2/3 vote).[3]
More reading
Information last updated: Oct 3, 2016

Arguments AGAINST Prop 52
None.

Note: we intentionally omit the official arguments/rebuttals found in the official voter guide. We believe they exaggerate claims, mislead through emotions, and use ALL CAPS irresponsibly.